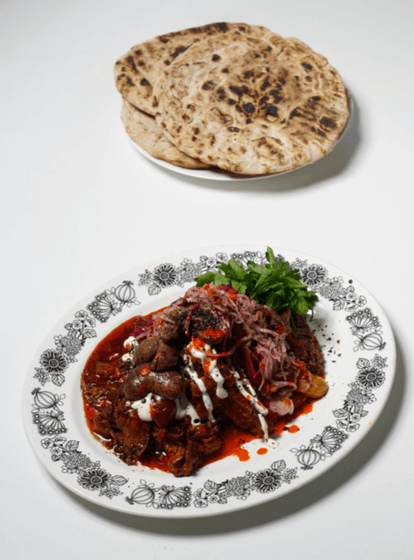 Black Axe Mangal is one of the most innovative and unconventional restaurants in the UK’s capital. What began as a six-week pop-up in the backyard of a Copenhagen nightclub, is now a 20-seater restaurant on the edge of a roundabout in Islington. Although small, Chef Lee Tiernan’s riotous space has attracted queues of in-the-know food lovers, global critics and the best chefs in the world. This, the restaurant’s much awaited first cookbook, celebrates Tiernan’s ground breaking culinary skill, as well as his bold aesthetic, influenced by his love of heavy metal and skate culture.

Like the eponymous restaurant, Black Axe Mangal showcases a variety of explosive flavours and underused ingredients, with open-fire cooking and classic techniques. In this book, readers are introduced to the three pillars of Lee Tiernan’s cooking: smoking, grilling and breads. With step-by-step explanations of key techniques, all illustrated in Lee’s home kitchen and garden, fans of the restaurant will finally have the opportunity to learn the secrets behind the restaurant’s most iconic dishes.