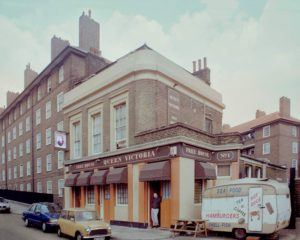 Following the sell-out success of The East End in Colour 1960- 1980, this book by a new photographer continues from 1980 as the regeneration of the East End accelerates to an unprecedented degree.

Tim Brown, a driver on London Underground’s Central Line, spent his spare time photographing the city’s financial centre and transport hubs, including the Docklands area just before the developers seized control of this vast industrial wasteland. His never-before-seen colour images were discovered by photographer Chris Dorley-Brown who edited and curated both this book and David Granick’s The East End in Colour 1960- 1980. Like Granick’s photographs, Tim Brown’s book serves as a nostalgic record of a corner of the capital that has changed almost beyond recognition.